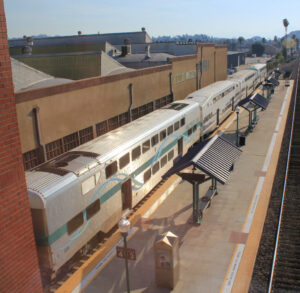 Old Riverside Foundation is opposed to the Riverside Downtown Station Improvements Project as currently proposed by Riverside County Transportation Commission (RCTC). These are our comments on the draft Environmental Impact Report (EIR) – we welcome your response.

Old Riverside Foundation finds the draft EIR inadequate in several areas and believes the project as proposed will result in negative effects on the City of Riverside’s residents and cultural resources, including the loss of the historic landmark Food Machinery Corporation (FMC) Plant 1 Building and significant adverse effects on the surrounding neighborhood.

1. Loss of a Cultural Resource, the Landmark FMC Building
Central to the proposed project is the demolition of the historic FMC Plant 1 Building adjacent to the existing Downtown Metrolink Station. The various uses of this building over time tell the story of Riverside’s growth in the twentieth century: from innovative citrus-packing and shipping technologies, to military support during World War II and the Korean War, to today’s aerospace business. The building is most notable for the design and production of an armed amphibious landing vehicle known as the “Water Buffalo” used in World War II’s European and Pacific campaigns. The FMC Plant 1 Building is eligible for inclusion on the National Register of Historic Places. Demolition of this recognized landmark building sets a dangerous precedent far beyond this project.

1A. Erroneous basis for demolition
In Uphold our Heritage v. Town of Woodside & Steven Jobs, 2007 (147 Cal.App.4th 587, A113376), San Mateo County Superior Court ruled that any costs associated with preservation and rehabilitation are not justification for demolition, stating “the fact that an alternative may be more expensive or less profitable is not sufficient to show that the alternative is financially infeasible.” Assumptions that higher-cost alternatives are to be dismissed are erroneous. Avoidance alternatives and preservation of historic resources must be presented and considered, regardless of cost. In addition, comments about the building’s appearance in the draft EIR are inappropriate and biased. Such comments do not speak to the structure’s integrity or viability, are matters of maintenance only, and are not grounds for demolition. Judgment of appearance is inherently subjective; an EIR must remain unbiased. Vernacular buildings, in particular, cannot be judged on aesthetics. Doing so demonstrates elitism that has no place in current historic preservation practice. A case for demolition requires substantial evidence, and the burden for such evidence is on the EIR. At present, it does not present a compelling case that demolition is the only alternative. CEQA’s purpose is to avoid demolition, not justify it.

1C. Lack of comprehensive site assessment
In discussion with Old Riverside Foundation, RCTC representatives emphasized an extraordinary cost to remediate hazardous material-tainted soil beneath the FMC Plant 1 Building if anything other than creating a parking lot would be undertaken (as mentioned above, dismissal of such alternatives due to cost are not permitted). To remedy this concern, Old Riverside Foundation requests a comprehensive site assessment including the estimated cost of hazardous material remediation.

1E. Inadequate mitigation measures
While it is standard practice to require the development of publicly-accessible interpretive documentation for historic properties that are demolished or significantly altered, such documentation is not a replacement for preservation and use. Plaques and other documentation are inadequate measures of mitigation. Such interpretive documentation should be considered only when preservation is not possible, and the draft EIR does not substantiate that demolition is the only option. As determined in League for Protection v. City of Oakland, 1997 (52 Cal. App. 4th 896), “Documentation of the historical features of the building and exhibition of a plaque do not reasonably begin to alleviate the impacts of its destruction. A large historical structure, once demolished, normally cannot be adequately replaced by reports and commemorative markers.” The draft EIR and Historic Resources Report are both deficient in providing clear, detailed instructions on how the demolished landmark and surrounding buildings and landscapes are to be documented in accordance with the Historic American Engineering Record (HAER), Historic American Building Survey (HABS), and Historic American Landscape Study (HALS). The draft EIR does not specify at what level the documentation will be prepared, what it would entail, and repeatedly refers to “HABS-like” documentation rather than specifying the requirements. In addition, if blueprints for the FMC Building Plant 1 and other affected buildings do not currently exist, due to the rarity of this type of building in Riverside and its association with the California citrus industry, history of the navel orange, industrial innovation, and military history, any demolished or significantly altered property in the project area should be recorded with comprehensive architectural scale drawings. Photographs should be created per HABS/HAER/HALS standards, with the text, at a minimum, in HABS Outline Format to ensure each property is recorded in a way that its history is integrated with both existing and no longer existing cultural settings. To remedy this situation, Old Riverside Foundation requests the EIR include the level of documentation detailed above.

2A. Decreased Air Quality
The project will result in increased air pollutants in the neighboring community, yet the draft EIR’s Table ES-5 Summary of Environmental Impacts determines “Less Than Significant Impact” and “No Adverse Effect” on air quality. The draft EIR bases its assessment on regional vehicle miles traveled (VMT), not on the vehicle traffic immediately surrounding the station. We find contradictions: in ascertaining the impact on the adjacent residences, Chapter 3.0. Affected Environment and Environmental Consequences, section 3.2. Air Quality, the sections titled “Permanent Impacts (Operations),” the draft EIR itself explains the significant adverse effect on the adjacent neighbor, residences, park, and school:
“Operation of the proposed Project would result in criteria pollutant emissions from mobile (vehicular) sources and area sources. Mobile sources would be associated with the increased number of vehicle trips to and from the Riverside-Downtown Station due to planned increased train ridership(…)”
However, despite the fact that the project’s goal is to accommodate increases in ridership and freight transportation, this section determines there will be no increase in station vehicle traffic:
“The Project is not anticipated to result in an increase in the number of train trips or associated emissions.” (3.2-9)
It goes on to state that no population or job growth is expected:
“The Build Alternative and all design options are not anticipated to cause or result in population growth. The Project is proposing to build an additional passenger loading platform, track improvements and expansion of the parking lot to encourage ridership and enhance train service; these attributes are not anticipated to induce population or employment growth.”
The report also states a return to pre-COVID levels is uncertain:
“In addition to the decline in population in the area, unemployment has sharply increased in the County of Riverside. In mid-March of 2020, the state of California was forced to impose significant restrictions on several public and commercial activities in response to the COVID-19 pandemic. As travel and commercial restrictions continue, the pandemic is likely to lead to a significant increase in unemployment due to the loss of thousands of service-related jobs. Employment statistics demonstrate the impact of the COVID-19 pandemic – the County of Riverside’s unemployment rate in April 2020 jumped to 15.3 percent compared to a rate of only 3.7 percent in April 2019. As travel restrictions ease with the decline on the rate of infection, there is uncertainty as to when travel demand would return to pre-COVID pandemic levels.” (3.2-10)
In short, the Project’s purpose is to address increases in ridership but the rationale for stating there will be no negative air quality impact on the adjacent residences is that there will be no increase in train traffic. This contradiction demonstrates the assessment of the air quality is inadequate and evidences a significant adverse effect on the neighborhood residents. To remedy this contradiction, Old Riverside Foundation requests further study of the impact of increased air pollutants on the immediately adjacent residences.

2B. Inadequate rider amenities & ridership assessment
We’ve been told this expansion is to benefit riders, not freight. If this project is to go forward in any capacity, we would expect basic rider amenities to be integrated, such as restrooms monitored by security personnel, shade, and seating. A multi-story parking structure, as was built in Irvine, Santa Ana, and Tustin, located on the west side of the tracks could be more convenient for riders than the proposed parking lot on the east side of the tracks that would displace the FMC Plant 1 Building. Yet we find no consideration of these options in the draft EIR. Ridership data suggests all these rider-focused amenities may not be needed: in a lengthy recent study (apta.com/wp-content/uploads/APTA-On-The-Horizon-Nov2021.pdf), the American Public Transportation Association notes that the COVID pandemic and the growing nature of working from home have decreased train ridership. As of July 2021, national rail travel was just below 40% of its pre-pandemic rate, with local rates closer to 20% reported by Metrolink (metrolinktrains.com/rider-info/safety–security/health-safety/coronavirus/coronavirus-updates/). We have no way to accurately predict future ridership demands. In meetings, RCTC emphasized the need to increase passenger capacity to address theoretical ridership from Riverside to two arena locations in Los Angeles for the 2028 Summer Olympics, which are to be held over a period of only sixteen days. We find it hard to justify the permanent loss of a cultural resource, as well as the expense and disruption this project would entail, when weighed against a speculative convenience for just sixteen days and a future ridership that may never materialize. To remedy these inadequacies, Old Riverside Foundation requests that the aforementioned rider amenities be included in the proposed platform design, and updated projections of future Metrolink ridership that include the impact of COVID-related decreases in ridership and increased telecommuting.

2C. Increased Noise
The project will result in increased noise in the neighboring community. Table ES-5, Summary of Environmental Impacts gauges the level of impact as “Less Than Significant with Mitigation” for some options and “Potentially Significant Impact” for others. The Permanent Impacts (Operations) state:
“(…) noise level increases are anticipated at multiple receivers for each design option. Noise levels would increase primarily due to the removal of the existing Prism Aerospace building which provides noise attenuation for multiple residential receivers in the area.”
The proposed mitigation measures of constructing 12’ and 8’ walls of an appropriate STC rating along several streets would not alleviate, but rather would increase the adverse effect by changing the aesthetics of the neighborhood, creating barriers for pedestrian traffic, and becoming targets for vandalism.

2D. Dislocation of an existing private business
The FMC Building is not derelict: it is occupied, in use, and in fine condition. It houses a viable business with over 50 employees. The current use of the building is appropriate for the area and has minimal impact on the adjacent residential neighborhood.

The impact on housing, air quality, and noise were included in the Summary of Environment Impacts but were not assessed through the environmental justice lens. These are essential elements to any assessment of impact on EJ communities, yet the draft EIR is lacking any meaningful study of those impacts.

In the Cumulative Section of Table 5, the NEPA conclusion is the project will result in “Adverse Impact.” This conclusion of a cumulative adverse impact, and the lack of consideration of other key areas calls for more diligence. To remedy these inadequacies, Old Riverside Foundation requests a more thorough environmental justice assessment.

In closing, Old Riverside Foundation believes Riverside’s unique heritage and its many remaining historic buildings are vital cultural and economic resources that demand protection for the City’s current viability and for the benefit of future generations. The demolition of any historic resource is not a matter to be taken lightly and is certainly not an acceptable consequence of this project. Expansion of passenger rail travel can be facilitated without negative impacts on Riverside’s historic cultural resources – adverse effects the draft EIR fails to address.

Posted in Blog and tagged advocacy